The most famous sight and tourist attraction is certainly the historic church Sagrada Familia (In Spanish Basílica y Templo Expiatorio de la Sagrada Família) in the l'Eixample district. The name means basilica and the expiatory church of the Holy Family. This beautiful, unfinished church was designed by Catalan architect Antoni Gaudí.

Construction of this holy church started on 19 March 1882. Initially it was based on the plans by architect Francisco de Paula del Villar, but in 1883, architect Antoni Gaudí was given the task to continue construction of the Sagrada Família. After Gaudi received an anonymous donation, he decided to replace the original Gothic Revival design with a more modern and innovative temple design. The only time construction was halted for a few years was during the Spanish Civil War. Until his death in 1926, Gaudi worked on the temple, and several architects have succeeded him since. 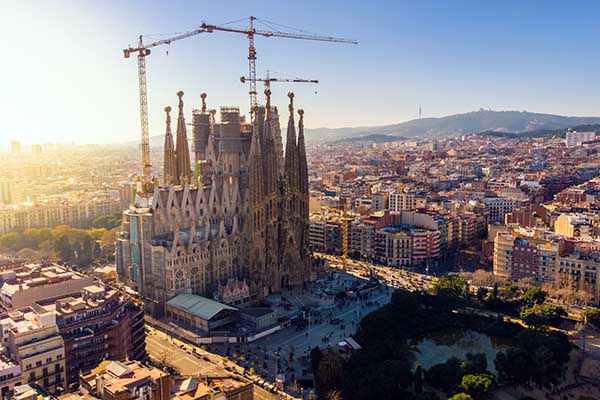 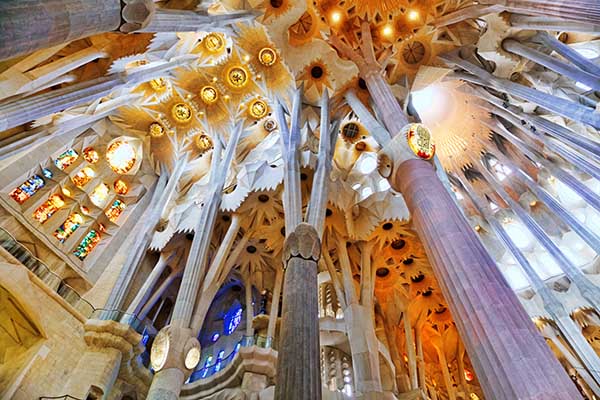 Tip: Because Gaudi's holy church draws over three million visitors every year, it's pretty much required to order 'Fast Track' tickets online before you visit the Sagrada Família. Tourism around Sagrada Família has gotten quite out of hand, and you might be queueing for hours only to learn that there are no more tickets available for that day. Smart travellers order their tickets in advance to avoid disappointment during their stay. You only pay a small extra fee for a lot of convenience.

What to see in the Sagrada Família?

Towers of the Holy Temple

The Sagrada Família will have a total of 18 towers; twelve towers representing the twelve apostles and four towers surrounding the celebration spire represent the four evangelists around Jesus Chris, plus a celebration tower for Mary and one for Jesus. The central tower will eventually reach 170 metres; almost as high as the Montjuïc, the highest hill of Barcelona. Out of respect for the creator, Gaudi wanted to keep the spire just a little shorter than this Montjuic hill. It's possible to buy special tower tickets to take a lift halfway up to the evangelists' towers.

The church building will get three façades, which will each represent a stage in Jesus's life. The façade of the birth and the façade of the passion have already been completed. The front façade will display the glory; this yet-to-be-built glory façade will become the main entrance and will depict the origin and end of mankind. The five-metre high doors of the La Sagrada Familia have been inscribed with the complete 'Lord's Prayer' in Catalan and 'Give us this day our daily bread' in 50 languages.

The birth of Jesus Christ is depicted on the birth façade (north-east side), which is also the oldest façade, being built between 1892 and 1930. He is surrounded by thirteen natural scenes and important events from the Holy Family of Nazareth. The south-west façade of the passion shows the passion of the Christ, his death and resurrection; this sombre façade is more modern and clad with angular statues (designed by Josep M. Subirachs). 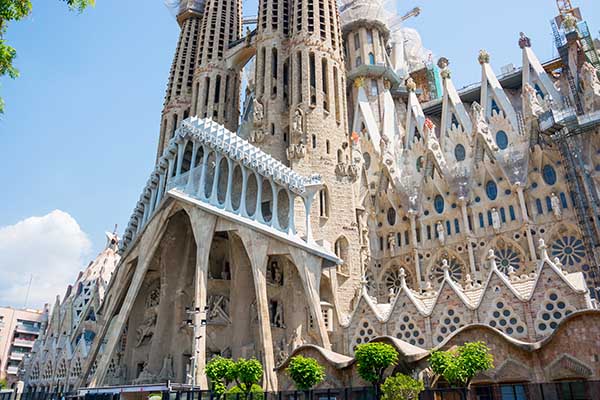 The façade of the passion 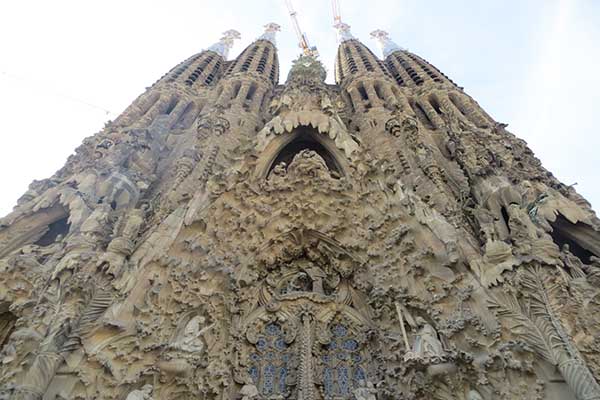 The façade of the birth of the Sagrada Familia

Inside the Holy Family church

The interior of the temple is very impressive. The unique columns of the church are like trees and branches that support the roof of the temple; the structure of the branches is such that it perfectly supports the weight of the ceiling and also produces the best possible distribution of light and sound. The stained-glass windows add a magical effect of colour and light and create a unique sense of tranquillity in the Sagrada Família church.

Museum of the Gaudi church

Underneath the temple there is the 'museum of the Sagrada Família'. This museum is included in the ticket price and tells you about the history and future of the Sagrada temple. Not just original drawings, models, and photos from Gaudi's day, but explanations on the latest construction techniques being used as well. 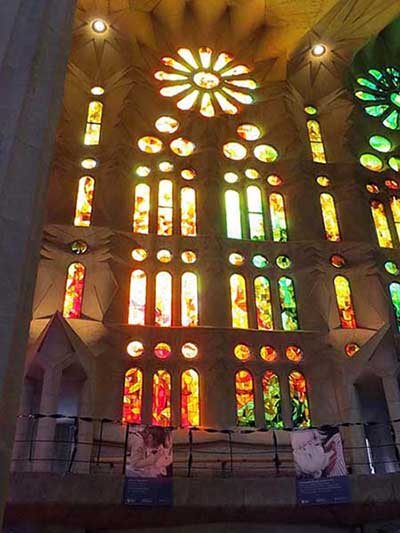 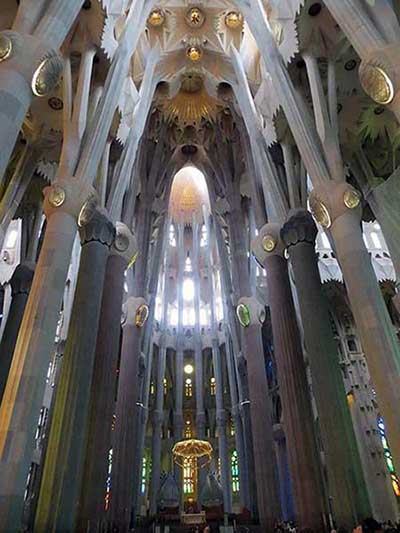 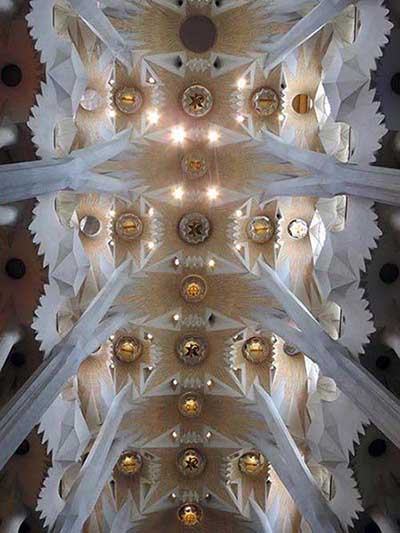 In addition to this Sagrada Família, architect Gaudí designed other characteristic sights in Barcelona, such as Casa Batlló, Casa Mila and Park Güell. Because Gaudí was the leader of Catalan Modernism, the basilica has now become that movement's most important symbol. Catalan Modernism is closely related to the Jugendstil. In 1926, Catalan architect Gaudi was unfortunately hit by a tram, and he died before he could complete his most controversial design. Gaudi is buried in the crypt underneath the basilica. Gaudi's crypt can only be visited during ceremonies.

According to the current plans, Gaudi's Holy cathedral should be finished in 2026, exactly 100 years after Gaudi was hit by a tram. The building is fully dependent on donations and admittance fees, and construction on the two largest spires for Jesus and Mary hasn't even started. The video shows what the completed church will look like:

How to get to La Sagrada Família Cathedral in Barcelona?

The easiest way to get to the cathedral is by metro. Metro lines 2 and 5 both have the station 'Sagrada Família'. When you get off at this station, you will arrive at the passion façade of the holy temple. This is the side with both the entrance and the ticket office.

As the church is not near other popular attractions, such as the Ramblas, a walk to the cathedral is usually not the quickest option. If you use the hop-on-hop-off bus, the blue line will stop right outside the Sagrada Família.