Park Güell is the famous city park with the mosaics and the salamander in the district Gràcia of Barcelona and definitely one of the most important attractions in Barcelona in terms of visitor numbers and architecture. Park Güell is a city park with an area of 15 hectares. Read more about the background of and access to this world-famous, fairytale-like park by Gaudi:

History of the unique green gardens

In 1900, Eusebi Güell, member of a rich and royal family from Barcelona, commissioned Antoni Gaudí to build a luxury residential park on an unused plot of land in the north east of Barcelona. The assignment was simple, only a sixth of the green area on the hill was to be built up with 60 houses. Antoni Gaudí eagerly accepted this commission, as it let him to express his own ideas about architecture inspired by nature. This can be seen in the park in the pergolas growing from the stone, walkways harmoniously integrated into the landscape, and the famous wavy and colourful mosaics. With his designs, Gaudí the architect wanted to emphasise the omnipresence of God in Park Güell. Gaudi wanted to recreate the typical British style of residential neighbourhoods, hence the word 'Park' in Park Güell. 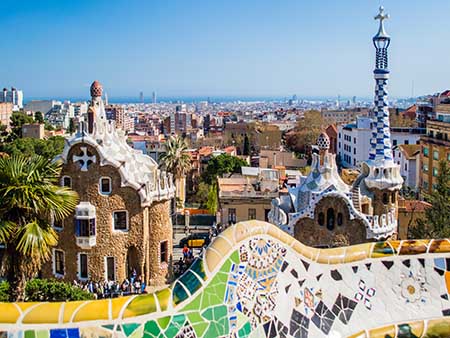 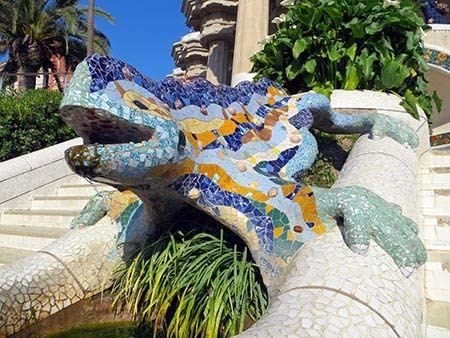 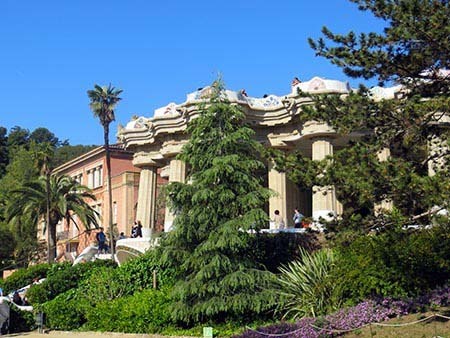 Visit the Salamander and the Mosaics

Remarkable aspects of the Park Guell are the entrance with the porter's lodge and porter's residence, the fence, the gallery of columns, the double stairs with the salamander (also called Dragon) and the enormous, flowing bench with mosaic work. Both the bench and the Salamander consist of countless mosaic pieces. Originally, Park Güell was intended as a residential neighbourhood. It was unsuccessful: Only two houses were sold and built. The Guell park was constructed over a period of 14 years, and this city park has been on the UNESCO World Heritage List since 1984. After the death of Eusebi Güell in 1922, the city park was donated to the municipal government of Barcelona.

One of the special sights in the Guell Park is the Casa Museu Gaudí; this is the house where Antoni Gaudí spent the last 20 years of his life. Not only did he design this house, but the museum it now contains provides a lot of insight into the life and work of Gaudi. You will need special tickets to gain entrance to this house.

Can you visit Parc Guell for free?

Unfortunately, the park has no longer free entry, and you will have to buy tickets to visit Park Guëll. It only covers 10% of the total park area; it's the most famous part with the salamander and the mosaic benches. The rest of the park is free, and you can catch a brief glimpse of the city park or enjoy a nice view of the city of Barcelona, including the Sagrada Familia by Gaudí and the Montjuïc.

In order to be sure that you can visit the world-famous park at the time you want, it's highly recommended (particularly during the high season) to purchase tickets in advance; only 400 visitors are admitted every hour, meaning the queues can get very long. Always buy you Park Guell tickets in advance because this is a sight you don't want to miss on your Barcelona trip!

The main entrance of Park Güell is located on the south side of the park. There are porter's lodges (1901-1903) on both sides of the iron gate (from Casa Vicens). Both buildings are characterised by beautiful roofs, also covered with the typical mosaic work. The right porter's lodge can be visited and contains a small exhibit from the historical MUHBA museum. 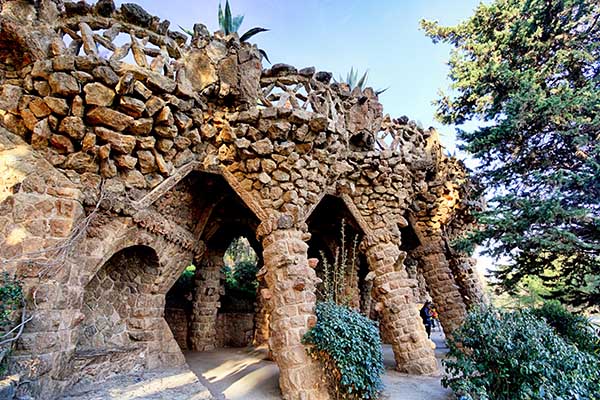 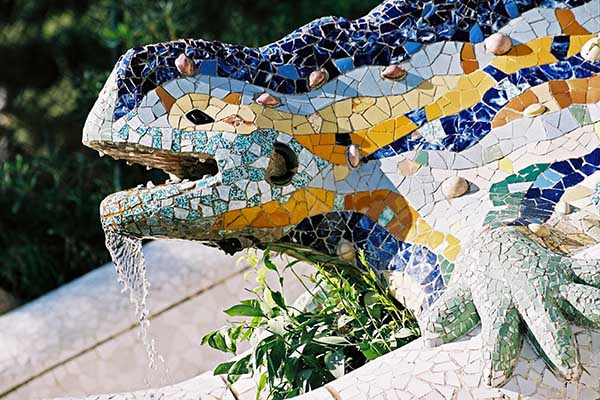 The salamander of Park Güell

The salamander / the dragon

What stands out immediately beyond the entrance are the double dragon stairs. This dragon or salamander consists of many mosaics and is probably the most photographed part of the park. You can also see the coat of arms of Catalonia halfway up the stairs. Above the salamander is a tripod formed by three snakes.

The large entrance eventually leads to the so-called 'hypostyle' room. This covered area consists of a total of 86 columns and was originally intended to serve as a covered marketplace. It makes the entrance of the park look more formal. The ceiling of the Hipòstila consists of small domes that have also been decorated with mosaic. These decorative interior arches have been made with tile shards by the artist Josep Maria Jujol. 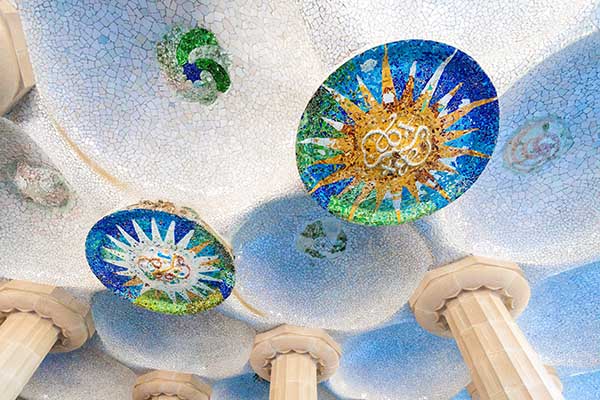 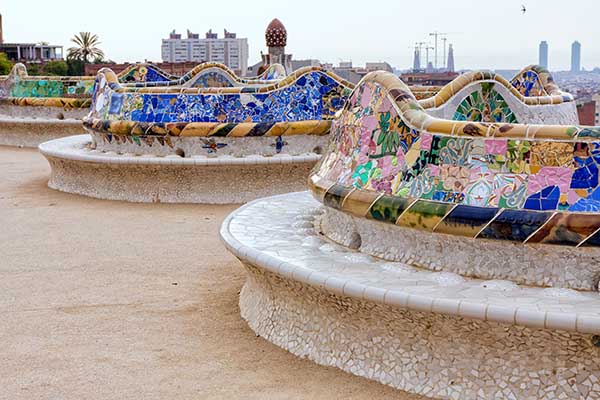 When you continue up the steps in Park Güell, you will arrive at the Greek Theatre above the hypostyle room. This Natural theatre is called the Plaça de la Natura. At the time, it was intended for open-air theatre pieces to be watched by audiences sitting on the mosaic benches. The benches form a balustrade that surrounds this square, offering a marvellous view of the city of Barcelona.

The school Baldiri Reixac is on the east side of the Greek Theatre. This used to be the mansion Casa Larrard, in which Eusebi Güell and his family resided until his death. After Casa Larrard was sold in 1922, it was converted into a school which was inaugurated when the park opened to the public in 1931.

Austrian Gardens of the Park Güell

The 'Austrian gardens' were originally intended as plots of land for houses to be built on. After Parc Güell became a public park because of Güell's donation, this part was first used as a municipal plant nursery. In 1977, the park received a donation of trees from Austria. These 'Jardins d’Àustria' gardens are a part of the park that is great for walks. The park has several aqueducts to supply water to the houses.

Austrian Gardens of the Park Güell 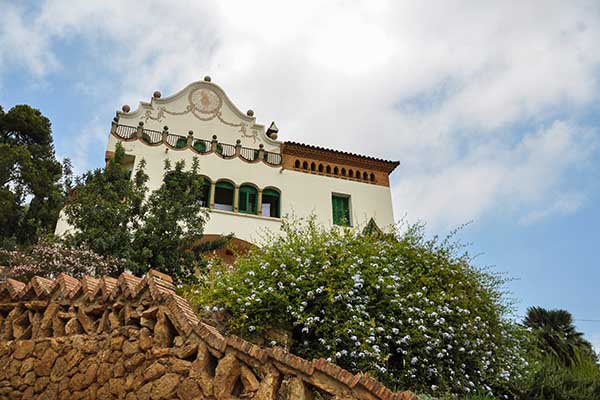 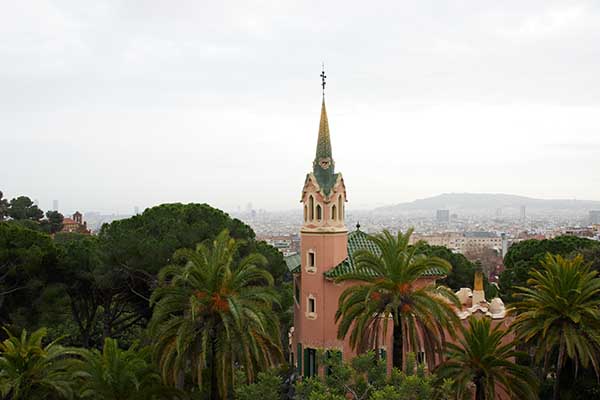 Only two houses were actually built in the 'Austrian gardens':

The white house Casa Trias belonging to lawyer Martí Trias i Domènech and designed by architect Juli Batllevel. The lawyer was the first person to buy one of the plots to build a house. It was hoped that many would follow his example, but it was not to be... The house is not open to visitors.

A model house designed by Francesc Berenguer, and it was bought by Antoni Gaudí and his family. He lived for almost 20 years there in the city park Guell that he had designed. Today this house is home to the 'Casa Museu Gaudi' a museum where you can take a peek into the life and history of Gaudi, for a fee. The museum can be visited without having to buy tickets for the paid section of the park.

Take a look at the video below for an impression of a visit to this unique city park. A fun tip near the entrance of the park is a visit to the Gaudi Experience. This 4D film takes you on a fascinating journey into the imagination of Gaudí. The film only takes fifteen minutes and can easily be combined with a visit to this Barcelona highlight.

How do you get to the Gaudi Park in Barcelona?

Park Güell is at some distance from the other sights in Barcelona. Don't expect to be able to quickly stroll to the park from the Ramblas or the Sagrada Familia. The best way to get there is to go by metro and then walk for fifteen minutes. There are three possible stations:

If you have poor mobility, it's best to take a taxi or bus line 24 and 92 from Plaça de Catalunya .

How to buy tickets for Park Güell?

A part of Park Güell can be visited for free, but the most famous and beautiful part with the mosaic benches and salamander can only be visited if you have tickets. In the high season there are often no tickets for sale for the same day. You can easily book tickets online.

Is it required to book tickets online?

Yes and no; in the low season you will be able to buy tickets for a time slot at the box office, where you will not have to wait long. In high season, tickets for the same day are most likely already sold out. Therefore, it is recommended to book tickets in advance, which will help you avoid long waiting times.

Can you deviate from the time slot?

No, it is important that you arrive at the entrance during your booked timeslot. If you miss your time slot, the park will almost certainly not let you in.

How to get to the park?

Park Güell is unfortunately not directly next to a metro station. From metro stations Lesseps and Vallcarca it is a fifteen minute walk to reach the entrance of Park Güell. Read more about the possibilities and accessibility of Park Güell.