Read all about Casa Vicens, the striking and colorful building designed by Antoni Gaudí in the Gracia district of Barcelona. Book tickets or tours for this Gaudi house.

In the Gràcia district, behind a wrought-iron gate in the shape of palm leaves, lies the best kept secret: the striking and colorful building of Casa Vicens. This building was the first major design by Antoni Gaudi in Barcelona and part of the UNESCO World Heritage List. After completing this building, Gaudí won the elite of Barcelona with his distinctive style. 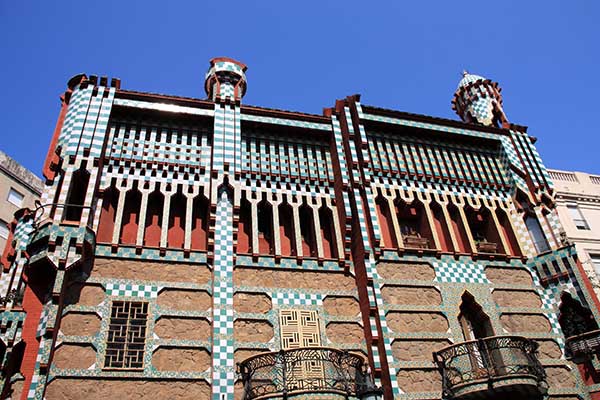 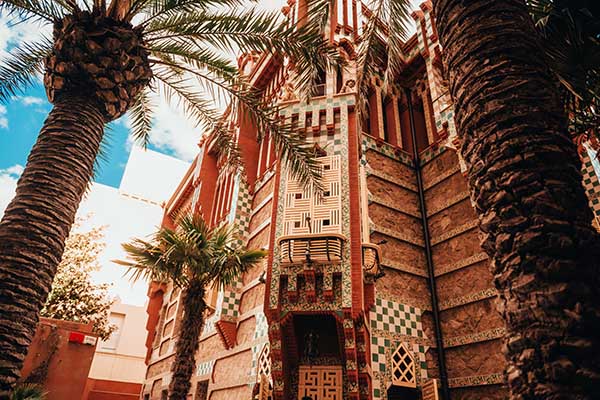 Casa Vicens, built between 1883 and 1889 is a mix of Mudejar and Spanish style and is spaciously covered with ceramic tiles and many ornaments. It was built as a summer house by order of Manuel Vicens i Montaner, a rich stock and currency broker.

Since 2018, Casa Vicens can be visited again after a thorough renovation. The house is furnished as a museum, has a permanent exhibition that tells you more about the history of Casa Vicens and you can take a look at all the special areas of the building as well as the garden and the terrace. Book your tickets online for only 12 euros.

Where is Casa Vicens in Barcelona?

(1906 - 1910) This apartment complex on the Passeig de Gràcia is one of Gaudi's most famous buildings and is on the UNESCO list. Because of its appearance without any straight lines, the building is also referred to as 'La Pedrera', or the stone quarry. It's roof terrace is a particularly popular photo op.

(1904 - 1906) Josep Battló i Casanovas commissioned Gaudi to build an apartment complex on the Passeig de Gràcia. Nothing in the building is angular; it's all flowing lines. The roof full of mosaics represents the back of a dragon. One of Gaudi's most beautiful UNESCO buildings to visit.