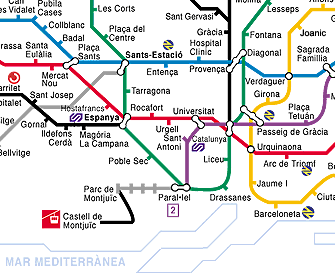 Nine different metro lines and 144 metro stations make the metro the quickest way to get around Barcelona. Click here to see the Barcelona metro map showing the metro lines.

There are two types of metro tickets. Get a good deal with the Hola BCN! Travel Cards. These personal 'Hola BCN Travel cards' are available for 2, 3, 4, or 5 days and cover all travel by any bus, metro (subway), tram, and regional train in and around Barcelona (within Zone 1). All tourist attractions are located in Zone 1 of the Hola BCN Card. When you order the card in advance, you can pick it up when you arrive at the airport, so you can immediately use it to take metro line 9 to the city centre of Barcelona.

You can also buy separate public transport and metro tickets. A single metro ticket is relatively expensive. A T-Casual (ten trips) can be a better deal than an Hola BCN Travel Card if your hotel is centrally located in Barcelona and you won't often use the metro.

From the airport to the center of Barcelona

Choose the airport near Barcelona you will be flying to or from to read how to get from the airport to the city centre by public transport. Only El Prat airport has a metro connection to the city:

You can also choose to take the hop-on-hop-off bus . A one-day ticket for the hop-on-hop-off bus costs €30 (€16 for children) and you can use the red, green, and blue lines as much as you want all day long. A two-day bus ticket costs €40. The buses tend to be crowded and there are often queues at the stops. If you want to get around quickly and cheaply, choose the metro. Via this website, you can buy tickets in advance at discount, or buy your tickets for full price at Plaça de Catalunya. This is also the biggest stop (and longest queue!) for the red and blue line.

Highly recommended! Almost every tourist wants to visit the Sagrada Familia and Park Güell. These sights are often sold out several days in advance and can have long queues. With this Barcelona Pass, Tiqets.com has combined them all into a single pass. The main benefits:

What do you get included? 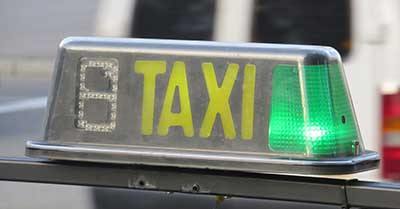 Taxis are quite affordable in Barcelona. The minimal fare is €2, every additional kilometre is €1.10 excl. surcharges for evenings, weekends, holidays, or extra luggage. Taxis in Barcelona are metered and the rates are always shown to the passengers. A taxi ride to or from El Prat airport costs about €30.

Our readers say
4.8 (95.83%) 13 reviews
May 23, 2022 Michael: "We had an amazing trip to Barcelona because of the interesting local tips for sightseeing, activities and things to do in Barcelona Spain."
Park Güell
Barcelona things to do
Magic Fountain
Sagrada Familia
Picasso Museum
Camp Nou
Montjuïc
Casa Mila
Casa Batllo